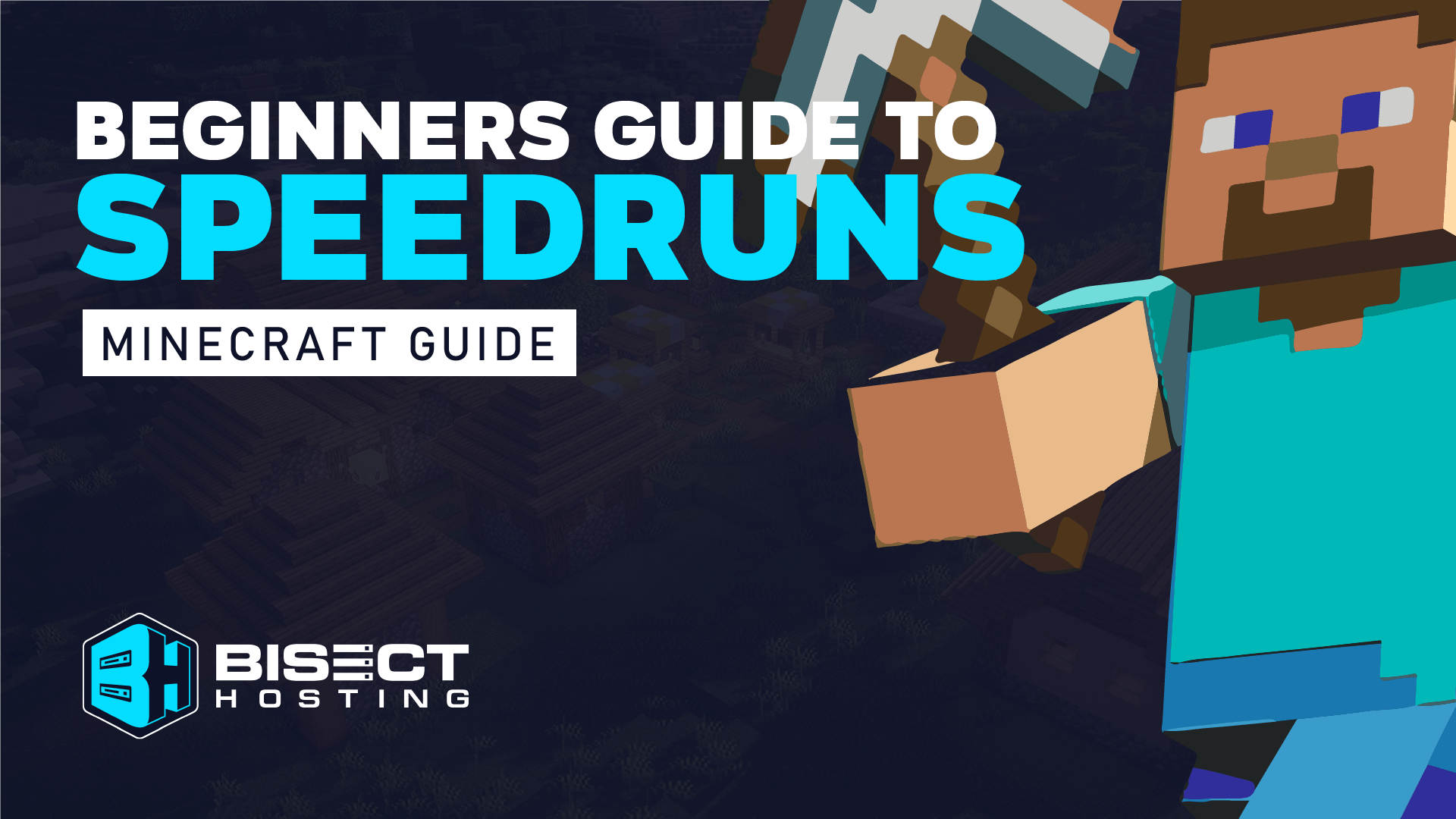 Minecraft is a game where one can spend over a hundred hours playing and happily never see the end. Both literally and figuratively in some cases! But how fast could you beat Minecraft if you tried?

To find out that answer, we dug through the top speedruns publicly available on Speedrun.com. After many notes, I can say with certainty, we will have you speedrunning Minecraft like a pro in no time! …Hopefully!

For this guide, we will be focusing on an “any percent, glitchless, random seed run” using the village strategy. This means killing the ender dragon with no custom seed entered at the start, all vanilla settings, and no bug abuse. Difficulty can be easy to hard, but for official speedruns, easy is generally used. All the power to those who pick hard for the extra challenge, however! You will probably need it.

There is a very high chance your first random seed will be… not so great. Restarting to find a world where something useful spawns nearby is both a valid and commonly used strategy. In our case, we will be searching for a village. Remember! Every second spent exploring is time on the clock!

What to look for in a seed:

For the sake of practice, this nifty seed below can be used. Spawn will be in a village with everything needed for the perfect run nearby.

The goal of the next few steps is to get to the nether as quickly as possible, but not without punching some trees first!

Use the wood to make a wooden pickaxe. Once complete, mine up some cobble and craft a stone axe, stone shovel, and stone pickaxe. Don’t waste any time on a sword! This axe will be our trusty sidekick for both tree cutting and combat.

Ideally, a village would have been found by this point. If not, keep on searching. While it is entirely possible to complete a record-setting speedrun without ever stepping foot in a village, we do not recommend it for beginners.

Now, with our three tools, a crafting table, extra cobble, and extra wood, it is time to make like a pillager and get attacking!

Start by building and standing on a three-block high tower next to the village’s iron golem. Then, in an entirely unfair battle, beat him up with your axe. The golem won’t be able to fight back when above him making for an easy kill. Mastering critical strikes from jumping will speed things up even further! Once dead, pick up those iron bars ASAP because it is time to go village looting.

Turn the hay bales into wheat and then bread. Just a few bales should provide enough food for the rest of the run. Next, go from house to house stealing every bed. Not enough? String and wool can be used to make beds too!

An important note for the lucky: If your village has a blacksmith with enough iron to make a bucket, flint & steel, and an iron pickaxe, skip killing the golem.

An important note for the extra lucky: If the blacksmith also has ten obsidian, or however many a nearby ruined portal is missing, make an iron pickaxe, flint & steel, and then build/repair the portal by hand. Once created, head straight into the nether, skipping to step 7.

With food, beds, extra wood, extra cobble, a crafting table, and iron bars, we are ready to find gravel! Remember! It is most common in and around water!

As soon as gravel is located, use your shovel from step three to get digging. Flint should drop pretty quickly, but luck is always a factor. It took me five or so blocks to find one. Use your remaining iron bars to make a bucket, flint & steel, and iron pickaxe, but only pickaxe if there was enough leftover to do so. Finally, fill the new bucket with water.

An important note for the unlucky: If only three iron bars dropped from the golem, and there was no blacksmith or second golem, mine and smelt some iron as quickly as you can. Both a bucket and flint & steel are needed to proceed past this point.

We are now ready for step 6, but here is a quick checklist just in case!

Ready? Then the time has come to build a nether portal!

The first thing we need is lava. If you spotted a lava pool on the surface, run back to it. Otherwise, it is time to break minecraft’s golden rule. We are digging straight down!

Our goal is to find a lava pool and turn it into a nether portal using nothing but a water bucket, cobble, and lava. This part can be a bit tricky, so we recommend following a video guide such as the one below.

With the portal made, open the purple gates with flint and steel, and jump on in.

Step 7, Into the Nether:

The one-third mark has been reached, but don’t let confidence slow you down! Over the next few steps, our goal will be obtaining at least twelve eyes of ender, but first, markdown your portal coordinates!

Many amazing speedruns are ended by getting lost in the nether. Don’t let yours join the list! These three run-saving numbers can be obtained with the “F3” button on your keyboard.

The next step is heavily based on luck, but with enough gold, the odds will be beaten!

Begin by searching for piglins. Bastion remnants are a great place to find them snooping about. Make sure to also be mining any nether gold ore spotted along the way. These nuggets will be crafted into bars for piglin trading in just a little bit.

An important note: Keep an eye out for a nether fortress. Finding one is our next stop! Once a decent amount of gold nuggets have been gathered, and piglins have been found, quickly turn the nuggets into gold bars. Unlike villagers who have trade menus, piglins will only accept gold bars when tossed at their feet. For convenience, I like to trap my new trade partners in a hole. This keeps them from wandering off or attacking while bartering. From there, make it rain!

There is a 15% chance the Piglin will give two to four ender pearls for each gold bar traded. Twelve ender pearls, at minimum, are needed to complete the run but a few extra would help! After trading all the gold ingots, kill the Piglins, and hope the speedrunning gods have been merciful.

An important tip: If you still have gravel, which I did not, placing it in the pit will raise the battered items while suffocating the Piglins.

The last step in the nether is finding a nether fortress where those feisty Blazes live. You will need Six blaze rods from slaying them, but a seventh wouldn’t hurt to have. Or perhaps it would a little. Their fire can be pretty hot.

This step has little else to it, but if luck is not on your side, the lengthy search for a nether fortress can mark the end of even the best speedruns.

Once you have the blaze rods, return to the nether portal, and head on out. Your time in the nether is done!

Back in the overworld, begin by crafting twelve eyes of ender. An extra eye is also nice to have assuming supplies allow! They are made by breaking down blaze rods into dust and then using that dust with an ender pearl. Those two items together will create an eye of ender like seen below.

Throw an eye of ender and then follow where it guides. But don’t forget to pick it back up! The thirteenth eye is the only spare, and they can be easy to lose! Once the eye starts moving into the ground, that means dig straight down. There is no time for caution!

Inside the stronghold, the end portal search begins! This can be annoying and sometimes disheartening, but don’t give up! We are almost there! Looting the chests along the way can also provide some much-needed armor.

At the End Portal, fill in the empty slots with your eyes of ender and jump on in.

It is time to put that ender dragon to bed! Quite literally in this case! Speedruns use a particular method for dragon slaying that can be a bit hard to set up. For that reason, we recommend watching the video below on how to do so.

As seen in the video, quickly placing a bed and attempting to sleep in it will cause an explosion that significantly damages the dragon.  Six of those well-placed explosions, and boom! The dragon is dead!

Congratulations! Your speedrun is now complete! But it is only the beginning. From ocean starts, to advanced tricks, there is still an entire world of Minecraft speedrunning yet to be learned. Maybe something we can continue together in an advanced guide somewhere down the line!

But for the time being, I hope I was able to provide a, swift, start to that journey. And who knows! Maybe it will be you in the top 100 list next time we check.

Looking to speedrun with friends?

BisectHosting offers Minecraft servers for just that! Enter your username and select vanilla Minecraft. Your server is just a few steps away!