The Ender Dragon is the first boss ever added to Minecraft and is considered to be the final boss of the game – adding the only real ending Minecraft has ever had.

Let’s go over how to beat the Ender Dragon, and effectively beat Minecraft (as if you won’t go back and play some more).

Where to Find the Ender Dragon

But don’t worry, you won’t have to search blind – as the item Eye of Ender can be used to guide you in the direction of the nearest Stronghold, and each Stronghold contains an End Portal.

Each Eye of Ender only shows you the way for a few seconds and has a fairly significant chance to break on use (a 20% chance). That means you’ll likely need to craft a handful or more before you can reasonably locate an End Portal.

What You’ll Need to Beat the Ender Dragon

Most challenges in Minecraft can be navigated without needing to gear up all the way if you’re smart about it. Unfortunately, the Ender Dragon is not one of them.

To beat the Ender Dragon you’ll need an arsenal of different armor, weapons, and items to ensure success. If you are playing with friends, it helps to have a powerful Minecraft server located near to you to ensure low latency during the battle!

The most basic necessities are good armor (as you’ll be taking plenty of damage, most being almost unavoidable), a bow, a pickaxe, ladders, and food.

Because of the huge damage, the Ender Dragon can deal, we fully recommend diamond armor with enchantments like Blast Protection. A diamond sword is also a great choice, because there will be short moments where you can melee the Ender Dragon for massive damage.

Along with the necessities, other goodies can really go a long way in keeping you alive during a fight with the Ender Dragon.

One of the best items to bring is Ender Pearls, especially because falling to your death is the way you’ll die the most in this fight.

Other great items to bring are potions, with many different potions being effective in different ways during the Ender Dragon fight. Some of your best options are the Potion of Slow Falling, Potion of Healing, and Potion of Swiftness.

How to Fight the Ender Dragon

Now that you know all that you need to bring, it’s time to go over how to use all of it to defeat the Ender Dragon.

But first, let’s go over the basics of the Ender Dragon fight.

The Ender Dragon permanently flies around The End, receiving passive healing from End Crystals that are atop sky-high pillars around the world.

To defeat the Ender Dragon, you’ll have to destroy each of these End Crystals to stop this healing (though technically if you’re able to outdamage the healing, the fight is possible without this step).

If you time it right, you’ll also do damage to the Ender Dragon for each crystal you destroy, as long as they’re actively healing the dragon.

To destroy End Crystals, you can shoot them with a bow from range. Some crystals will be protected by iron bars, however, so you’ll have to use ladders to climb up and clear them with a pickaxe.

Be careful when you destroy End Crystals, as they explode and do massive AOE damage – which is part of the reason why armor is so important in this fight.

And keep an Ender Pearl ready when climbing, as the pillars are very high, and the Ender Dragon can swoop by to knock you off – using an Ender Pearl at the right time will save your life in these spots.

The Ender Dragon has a variety of ways to kill players – and will cycle between them throughout the fight.

The most dangerous attack the Ender Dragon has is very straightforward, charging at the player to deal massive collision damage that varies depending on difficulty.

Outside of this charge, the Ender Dragon also breathes fire, and launches fireballs, both dealing different amounts of damage depending on difficulty settings.

Dealing Damage to the Ender Dragon

One of the easiest ways to get free damage on the Ender Dragon is by destroying End Crystals as they heal the dragon – but this isn’t the most reliable system as the healing is quite strong, so destroying them all as quickly as possible is just fine.

Most of the Ender Dragon fight you’ll be able to land shots with a bow to deal damage if you’re a good shot. Because the Ender Dragon is almost always moving, and fast, you’ll have to practice your aim if you want to land hits.

But outside of the bow, you’ll still have opportunities to deal massive damage with melee attacks, but timing here is everything. The Ender Dragon will only stop flying around for brief moments in time where it will land in the center of the towers around The End.

Once the Ender Dragon Lands, players can melee it to deal massive damage, and bonus damage if you hit its head. You won’t be able to shoot the Ender Dragon during its landing, as arrows will simply bounce right off, so you’ll need a melee weapon to take advantage of this time.

The Ender Dragon will cycle between flying around and landing in this spot until you’ve managed to kill it.

What to do After Beating the Ender Dragon

Once you’ve killed the Ender Dragon, you’ll earn plenty of experience after its amazing death animation. You’ll also be able to receive the dragon egg as long as you use a piston to retrieve it instead of mining it.

If you ever want to do the fight again, you can resummon the Ender Dragon by placing four Ender Crystals at north, south, east, and west around the middle structure where the Ender Dragon lands.

Did you know, there has been over 200 million copies of Minecraft sold as of May, 2020? That’s a lot of people battling the Ender Dragon!

Players that kill the Ender Dragon get a massive 12,000 experience point drops! That’s enough to take a single player up to level 68 from 0!

The Ender Dragon is the same wide as it is long at 16 blocks.

No poison or status effects can affect the Ender Dragon.

Ender Dragons cannot stand on the ground, it is always flying. 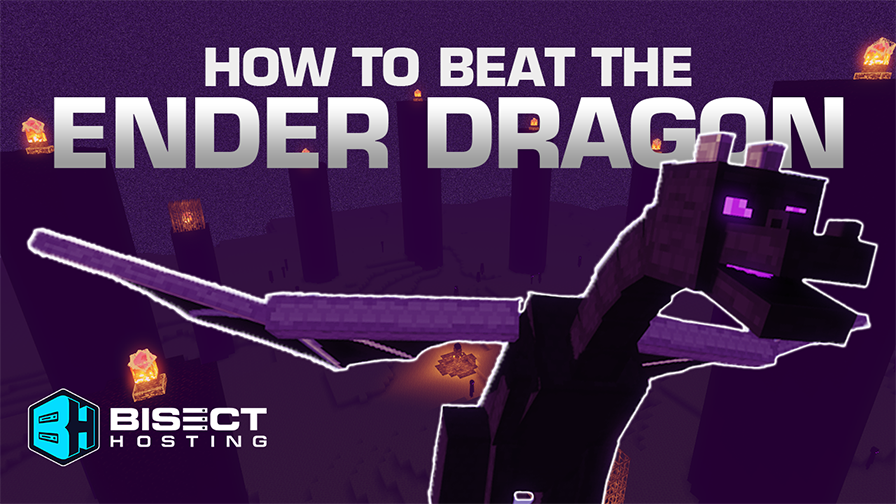 How to beat the Ender Dragon”

Has the way to defeat the Ender Dragon changed at all after the nether update. Additionally will the fight at all change once we see the caves and cliffs update come to the game.